Millennial home-ownership in the US is at a record low.

The age range of millennials — Bank of America Merrill Lynch economists used 25 to 34 — is usually prime time for purchasing a first family home. That demographic factor is one reason why some housing economists are bullish on demand.

However, the data has not yet caught up.

“We believe the delay in home-ownership is due to tighter credit standard and lifestyle changes, including delayed marriage and children,” wrote Michelle Meyer, a US economist at BAML, in a recent note.

“We do not expect these factors to change in the medium term, keeping the home-ownership rate low for young adults.”

The following charts illustrate some of these factors. 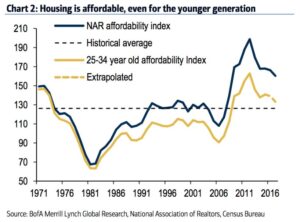 The National Association of Realtors computes an affordability index by comparing the median home price to the median family income. That way, it gauges whether a typical family can qualify for a mortgage loan in a particular region.

Although housing is affordable for millennials by this aggregate measure, it’s lower than for the rest of the population whose work experience means that their incomes are likely higher.

The big obstacle for young people is making a down payment, which the NAR assumes as 20%, Meyer said.

There was $1.44 trillion in outstanding student loans at the end of the first quarter, according to the Federal Reserve.

It’s not only about affordability… 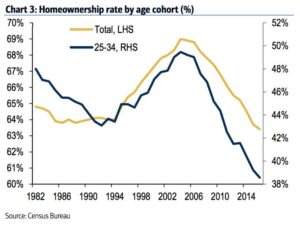 The millennial home-ownership rate has fallen at a faster rate than other age groups.

“Maybe there is something to the stories about Millennials preferring to spend money on avocado toast instead of their home?”

Millennials are spending more on renting… 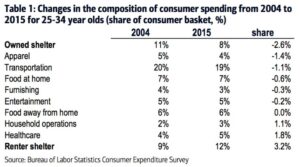 The share of spending on renting increased in the decade through 2015 while spending on owned housing fell, according to the Consumer Expenditure Survey.

Millennials are also more likely to live with their parents… 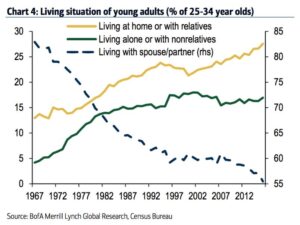 “Life events such as getting married or having children are typical triggers to buying a home,” Meyer said. “The longer this age group lives with parents or independently, the more home-ownership will be delayed.”

Millennials appear to be flocking to city centers… 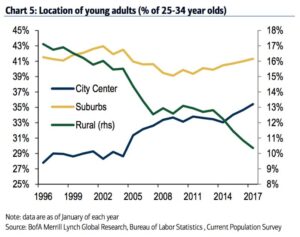 “According to BuildZoom, new home sales within 5 miles of the centers of the 10 most densely cities have exceeded 2000 levels but if you go another 10 miles out, sales are about 50% below 2000 levels,” Meyer said.