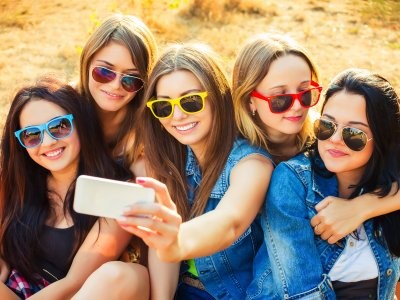 No millennial attracts more mockery than the “thought leader.” These self-described experts, also known as brand consultants, travel the globe engaging in the debatable science of telling companies how a generation comprised of over 75 million people likes to eat, work, shop and live, all the while pulling in serious cash.

Now, there’s a new crop of teenage entrepreneurs looking to pick up where their elders left off.

As millennials march steadily toward middle age and obsolescence, an increasing number of teen-run consulting firms have sprung up over the past year to teach Olds what’s cool.

This next generation is known as Generation Z. It comprises around 72 million kids and young adults born between the years 1996 and 2010 . Gen Z has been called “ millennials on steroids,” and brands are already becoming desperate to cater to their tastes . The teens who run these Gen Z consulting businesses are working with big clients — major telecom companies, retailers, auto manufacturers, airlines and Fortune 500 brands.

Unlike the millennial thought leaders who preceded them, these Gen Z gurus are extremely young, hyper-connected, fluent in meme culture and armed with a competitive nature that Jonah Stillman, an 18-year-old Gen Z consultant from Minneapolis, said is innate to his generation.

“Millennials love to go on social media [and] let everyone know, ‘Hey I just got this awesome job, come apply!’” Stillman said. “Us Gen Z-ers are more competitive and less collaborative; we would never do that. We want the job for ourselves.”

For Stillman, generational consulting is a family business. Together with his father, David, he runs GenZGuru , the “first father-son Gen X/Gen Z speaking team.” Stillman said he got the idea to cofound the company with his dad, an accomplished trend forecaster, writer, consultant and speaker, when he was around 14 or 15.

“I started to see that I wasn’t really a millennial,” he said. Stillman went online and began researching Gen Z. He immediately decided that he wanted to follow in his father’s footsteps and learn everything he could about his peer group.

Unlike many myth-makers on millennials before them, the Stillman pair are quick to point out that their insights are driven by hard data.

Together with his father, Stillman has published three papers on Gen Z, co-written a book published by HarperCollins entitled Gen Z at Work : How the Next Generation Is Transforming the Workplace and written for the New York Times and other outlets about youth in the workplace.

Millennials ushered in an era of open office plans, unlimited vacation policies, “purpose-driven” work and Slack, but Stillman argued that today’s corporations are woefully unprepared for the demands of the Gen Z workforce.

“People refer to us as if we’re millennials,” he said, “but if we’re treated as millennials, there will be big problems.”

Connor Blakley , a Gen Z thought leader based in Cleveland, said he believes there will also be big problems for brands if they attempt to market to Gen Z as millennials.

After traveling to South by Southwest at the age of 14 to shadow infamous entrepreneur Gary Vaynerchuk, Blakley said he became taken with the idea of starting his own company. Now, he runs YouthLogic , a Gen Z-focused consulting firm based in Ohio that employs four full-time Gen Z employees and countless other teen contractors around the country.

Blakley has written a book called BrandZ , and his company handles youth marketing efforts for clients such as Sprint, NPD Group, Hootsuite, Daymond John and several other leading consumer brands.

Blakley is correct that when older people, particularly investors, don’t know what’s cool, the first person they often turn to is to someone younger.

Tiffany Zhong, a 20-year-old in San Francisco, knows this all too well. At the age of 18, Zhong became the youngest venture capitalist in Silicon Valley , working as an analyst at Binary Capital.

Zhong was hired by the firm to act as a gateway to the next generation, and the companies she sourced for Binary were ones she found out about primarily through her network of fellow teens.

Now, like Blakley, Stillman and others, Zhong hopes to act as a gateway to Gen Z for a wider pool of investors and brands. She recently dropped out of the University of California, Berkeley, to found Zebra Intelligence , a Gen Z-focused research firm that launched in May.

“I was like, wow, I guess a lot of people in the business world are really out of touch and don’t have access to, or an understanding of, teens,” she said of her decision to start the company. “I want to address those needs and help them understand teens on a much deeper level.”

Not all teen thought leaders have ditched school to pursue their big-money dreams, however. Melinda Guo, an 18-year-old soon-to-be freshman at Stanford, runs her Gen Z consulting firm, JÜV Consulting, with the help of two peers she met during a summer program at Cornell University. She and her fellow 18-year-old co-founders, Ziad Ahmed and Nick Jain — who will both be freshman at ivy league schools in the fall — are committed to balancing school with thought leadership.

JÜV Consulting (based on the word juvenile) is a top-to-bottom teen-run consulting firm that acts as a platform connecting youth consultants around the country with brands. The company currently employs more than 80 teenage Gen Z consultants in addition to maintaining a “global youth network” of over 400 teens in 20 states and 30 countries.

What happened to a summer job at the pizza shop?

Guo said that throughout the past year, she has seen kids clamoring to become Gen Z experts. Applications to become JÜV affiliate consultants have shot up.

But why are so many teens scrambling to become Gen Z experts and youth marketers instead of say, bussing tables, lifeguarding, babysitting or occupying any number of entry-level jobs held by previous generations?

Guo thinks being a “super-brander” is a characteristic of her generation. “We grew up in a world where we had access to all these online tools at the tips of our fingers and Gen Z is more inclined to brand ourselves. We’re so used to creating our images on Instagram , Facebook ,Snapchat . For us, to brand ourselves on a personal website or via a business is just second nature.”

Ishan Goel , an 18-year-old in Dallas, agrees. He launched his own Instagram marketing agency in sixth grade by creating a website and outsourcing work to other teens he found on freelance service marketplace Fiverr .

In the group, teens as young as 13 discuss personal branding and bond over the challenges of starting a business. One young consultant and member of the group who declined to be named said that he felt like he got a late start by “waiting until high school” to really focus on branding himself. Another said he had “only just began laterally networking” (aka making friends at school).

They’re different from the millennial marketers

When you ask this new class of Gen Z gurus what they think of the “millennial experts” who paved their way, many don’t give their predecessors much credit.

“The majority of older Gen Z experts are people who said they were millennial experts and now they know they’re screwed,” Blakley said.

You can’t blame Blakley for his skepticism. For a time, the “media’s favorite millennial ” expert was a 55-year-old comedian masquerading as a 30-something.

“People are sick of hearing about millennials and millennial experts,” Stillman said. “Millennials are the most talked about generation in history. … Now people want to know what’s next.”

But for those of us slipping deeper into cultural irrelevance, there is still hope. Just have some kids.

Angie Read is a 46-year-old mother of three Gen Z kids aged 18, 16 and 13. Recently, with 20 years of marketing experience under her belt, she decided to pivot to becoming a Gen Z expert. She is in the process of co-authoring a book on Gen Z. She also blogs on her site, GenZmom , and spends her days helping brands appeal to the type of teenagers that she goes home to every night.

“My kids understand that they’re guinea pigs,” she said. “When their friends are over, sometimes I’m like, ‘Who do you follow on Instagram? What are the funniest videos on YouTube right now? What is cool?’ And they’ll be like, ‘Stop! We’re not your focus group!’”

Is it a long-term career or just a stepping stone?

Though they’re still young, the Gen Z consultants we spoke to say they are acutely aware of how fast things can change and how quickly their skills can become irrelevant. Because of this, many of these teen entrepreneurs are hyper-focused on networking, hedging their bets and keeping their options open.

Guo said she and her cofounders are dedicated to keeping JÜV Consulting running through college, yet she has no set long-term career trajectory. Instead, she plans to go off to school with an open mind.

“We will still run the business … but I view college as hopefully the best four years of my life,” she said.

Stillman, who won’t be attending college in the fall, plans to continue to follow in his father’s footsteps as a trend forecaster. But he said that despite how different his lifestyle looks, he tries to stay grounded.

“The famous word among our generation is ‘influencer,’” he said. “People think, ‘Oh, just get 55,000 followers on Instagram and suddenly you don’t have to go to school and you’re so relevant.’ But it’s behind-the-scenes work you do that really makes the difference. My thing is, to these influencers, what’s your plan in 30 years?”

Blakley and others we spoke to, however, said that becoming a Gen Z thought leader is the fastest path to success no matter what you eventually plan to do. You can always pivot and figure out the details later.

“I have cell phone numbers of billionaires and CEOs in my phone right now, all because of this thing,” Blakley said. “If I ever want to start something else, I’ll easily be able to. I honestly think I could do anything. If I started a company that specialized in making office supplies cool to Gen Z tomorrow, I could be a millionaire.”