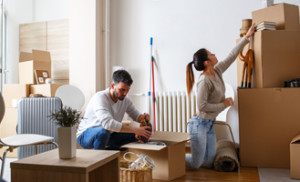 The latest renter survey from Freddie Mac is packed with good news for the apartment industry.

A growing number of renters are optimistic about their financial situation and expect to stay where they are even if their rents increase, the research findings, released Monday, show. Also of note, a declining number of renters say they’re working toward home-ownership, expect to buy a home, or plan to move within the next few years.

Feeling Wealthier
Since Freddie Mac’s last renter survey, in September 2016, renters’ sentiments about their financial situation have trended upward. In fact, 41% of renters now say they have enough money to last beyond each payday, up from 34% in September, while those who say they can’t afford essentials fell, from 20% to 14%. The percentage who say they have enough to cover their expenses from payday to payday is relatively unchanged, at about 45%.

No matter the location or age group, financial confidence rose among renters in the latest survey. The biggest increases occurred in rural households, up from 27% to 46%, and baby boomers, up from 38% to 48%.

Staying Put
Property managers will be happy to learn that the percentage of survey respondents who said they expect to move in the next two years has fallen, from 38% to 33%, since September, while the number of renters who don’t know when they expect to move rose, to 37% from 30%. Additionally, 55% of renters say they like where they live and don’t plan to move if their rents rise.

“It would appear from our new survey that renters today feel better about their finances, like where they are living, and view renting favorably. This is consistent with findings from earlier surveys that show a steadily growing number of renters have a positive view of renting,” said David Brickman, executive vice president of Freddie Mac Multifamily, in a statement.

About The Survey – Conducted in March for Freddie Mac by the Harris Poll, the survey produced findings based on responses from 1,282 renters in urban, suburban, and rural markets, comprising millennials (ages 18 to 34), Gen Xers (35 to 49), and baby boomers (50 to 68).

The percentage of renters who, in considering their next home, say they plan to rent rose, from 55% to 59%. The biggest increases occurred among suburban households, up from 48% to 57%, and younger millennials (ages 18 to 24), whose numbers rose from 64% to 73%.

Meanwhile, the percentage of renters who expect to own has dropped four percentage points, to 41%, since September, and the number of renters who say they’re working toward homeownership has also fallen, from 21% to 15%, over the same period.

The survey also shows how much many renters covet urban areas: Three-quarters of the respondents say they’d consider downsizing in order to live in an urban area, with half of that group noting that they’re either very or fairly willing to downsize.