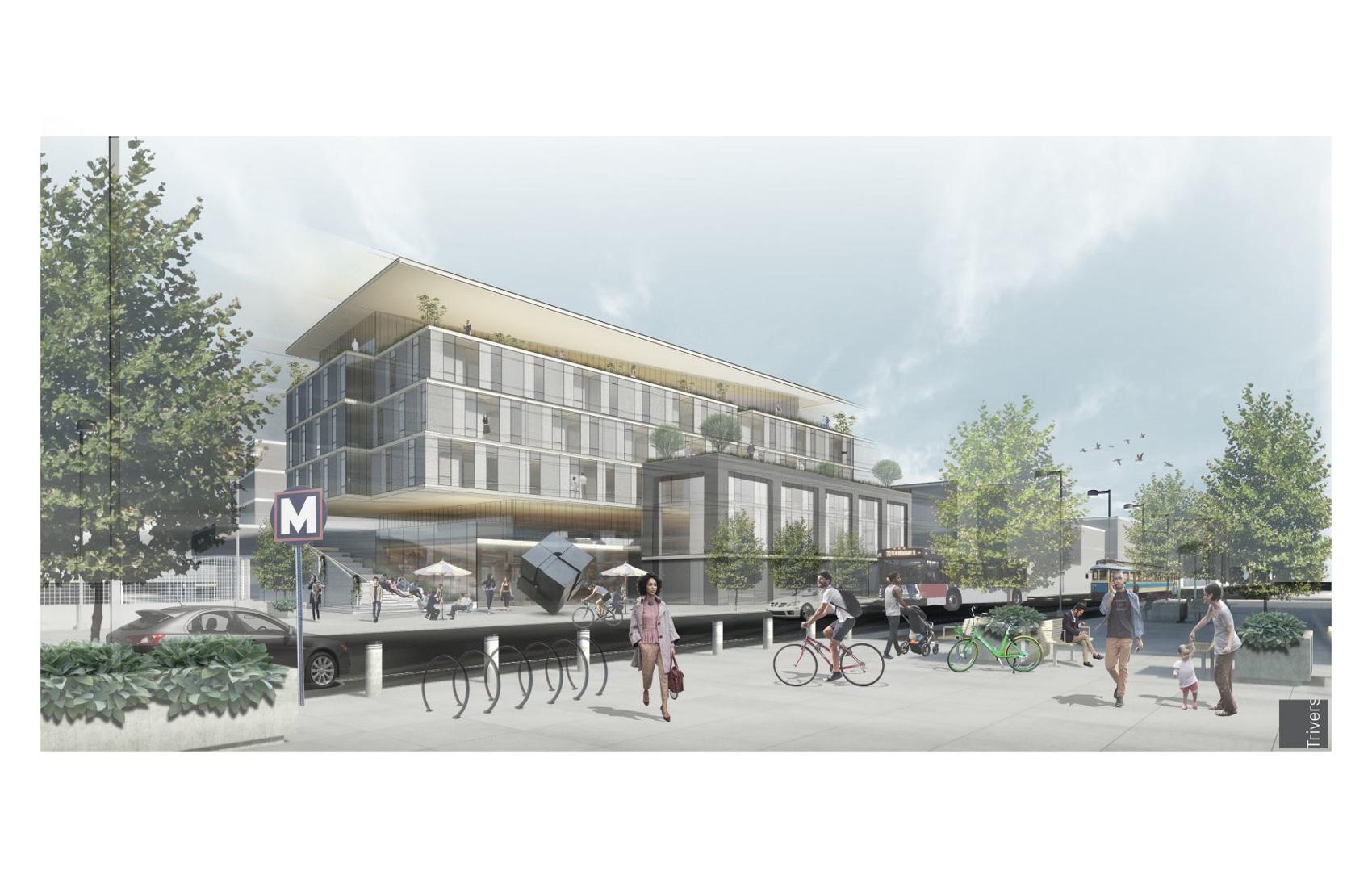 An Indianapolis developer plans to transform the block around the Forest Park-DeBaliviere MetroLink station with a $70 million development adding 265 apartments and 34,000 square feet of retail.

The privately owned strip mall to the north of the Bi-State parking lot is also part of the project, slated for a four-story, 106-apartment building with 16,000 square feet of ground-floor retail.

“We are excited to partner on a project that will completely transform the area around one of Metro’s most popular transit centers and bring new resources and amenities to the Skinker-DeBaliviere neighborhood,” Bi-State President and CEO John Nations said in a statement.

Pearl Cos. Principal Jeff Tegethoff said his firm made an “unsolicited” offer for Bi-State real estate and has been working for months on a deal. Pearl has site control over all the real estate, including the strip center owned by DeBaliviere Community Center LP, Tegethoff said.

MetroLink will share some of the 342 parking spaces planned for underground garages in the development and have, “at a minimum,” as many as it does now on the surface parking lot, Tegethoff said.

Tegethoff, a St. Louis native whose firm has recently embarked on several major developments in the region, said the project will be “catalytic” and “change the narrative for public transit in St. Louis.”

Other than downtown MetroLink stops, the Metro Landing senior living development in Swansea and the recently built Sunnen Station Apartments near a stop in Maplewood, the Forest Park-DeBaliviere station would be one of only a handful of the region’s light rail stops immediately surrounded by dense residential development.

Joel Foss, principal at St. Louis-based Trivers Associates Architects, which is designing the project, said he commuted on MetroLink for 10 years and tried to design the development from a commuter’s perspective. Unlike many MetroLink stops, a “prominent” residential neighborhood surrounds the Forest Park-DeBaliviere stop, he said.

“It’s in a really great spot for this to happen and to have a developer who’s really tuned in to the urban fabric and what’s going on in other cities … you add those things together and the willingness of the partners who have been involved and you see stuff like this happen,” Fuoss said.

The project still needs final approvals from St. Louis and the Federal Transit Administration. The structure of the deal is still being finalized, so it wasn’t immediately clear whether Bi-State would sell its lots to Pearl Companies outright or lease the land to the firm. But the neighborhood has already expressed its support for the proposal.

The Skinker-DeBaliviere neighborhood plan, adopted by the city last year, envisions the MetroLink parking lot being “developed into something more substantial,” said Brandon Sterling, executive director of the Skinker DeBaliviere Community Council. He said the neighborhood hopes “the project will be something the whole region will be excited about.”

Located on the northern edge of Forest Park, the development would also be on the recently opened Loop Trolley line, which runs between the Delmar Loop and the Missouri History Museum, in addition to MetroLink.

“We understand we’re right smack dab in the middle of it all. We’re surrounded by some of St. Louis’ best amenities,” Sterling told the Post-Dispatch. “We really want to show off the neighborhood and have a project that serves as a great entry point and an anchor. It’s time.”

Pearl hopes to begin construction by the third quarter of 2019 and complete the project by the end of 2020.

“Pearl has recognized the opportunity to bring national focus to St. Louis by transforming the existing Forest Park-DeBaliviere MetroLink Station and adjacent retail center into a catalytic transit-oriented development,” Tegethoff said in a statement. “The result will have lasting impact on St. Louis for generations.”

It’s the fourth major development Pearl has embarked on in the St. Louis region over the last two years. By the middle of next year, Pearl hopes to open the Hibernia, a $25 million, 100-unit apartment complex with a grocery store in Dogtown. It hopes to finish its revamp of the remaining City Hospital buildings near Lafayette Square into 74 apartments about the same time.

In Chesterfield, Pearl plans a March groundbreaking on a $75 million, mixed-use development with a restaurant, 135-room hotel and 173 apartments near the southwest corner of Highway 40 (Interstate 64) and Chesterfield Parkway.

There’s been some recent big residential developments in the Skinker-DeBaliviere area, too. Last week, plans went public for a $31 million, 149-unit apartment building and parking garage that would replace tennis courts and a pool at 5539-5551 Pershing Avenue. The developer is affiliated with CityWide Apartments, a new brand for local landlord and developer Asprient Properties. A company affiliated with an Asprient principal also recently completed the 160-unit Tribeca apartment complex at 5510 Pershing Avenue.