MAPPED: Where Millennials Are Buying Homes – And For How Much

Home/News/MAPPED: Where Millennials Are Buying Homes – And For How Much

Millennial home-ownership rates are essential to understanding the housing market because they facilitate additional home sales for other people. How does this work? Suppose you make an offer on a house. The current owner is also probably on the market, and he or she likely has a contingent offer on another house. This sets off a chain reaction throughout the economy. Millennial home-ownership rates are therefore an easy way to judge the economic vitality of any given area.

That’s why we created this new map: 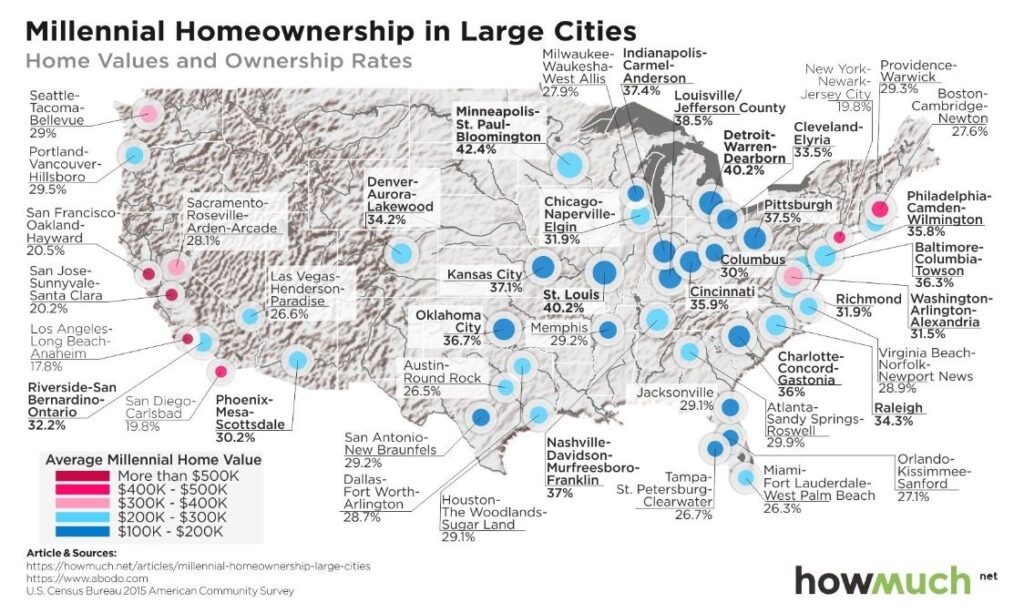 Our visual takes millennial home-ownership data from Abodo and maps it by metro area across the country. Abodo adopted the data from the U.S. Census Bureau, which regularly collects a variety of information about the population, including the age of homeowners, the estimated value of their homes, and how long it would take to accumulate a 20% down payment. Our numbers are from 2015. We then overlaid this information across metro areas with bubbles representing the portion of millennial homeowners in each market: the bigger the bubble, the more millennial homeowners there are. We also color-coded each bubble to represent the median value of their homes—dark red circles mean the homes are worth over $500k, and dark blue means under $200k. This gives you a quick snapshot of the overall economy and the housing market.

The first trend you can see on the map is a clustering of red circles on both the West Coast and along the Northeast. The most expensive city in the country for millennials is San Jose, CA, where the average millennial buys a home worth $737,077. Seattle, WA in the Northwest is also relatively expensive at $342,769. These are population-dense areas with booming tech sectors. At the other end of the spectrum, you can see clusters of blue bubbles across the Midwest in old manufacturing cities like Detroit, MI ($148,404) and Cleveland, OH ($160,251). Memphis, TN is the cheapest place for millennials at $142,795. Southern states like Texas and Florida are also relatively affordable thanks in large part to their suburban sprawl, which Zillow predicts will expand next year.

It’s no surprise that homes are more expensive in California (think Silicon Valley) than the industrial heartland, but consider how homeownership rates change based on affordability. The red bubbles all tend to be smaller than the blue bubbles. This means that as homes get more expensive, millennials become increasingly unable to afford them. It’s not like there’s a surplus of ultra-rich millennials buying up all the houses in California and New York. Millennials are just as sensitive to high prices as everyone else.

Let’s break the map down into a top ten list of the urban areas with the highest rates of millennial home-ownership, combined with the average price of their home. A full 42% of the millennials living in Minneapolis-St. Paul, MN own their own home, the highest rate in the country.

Buying a home is often the biggest financial decision anybody makes, and that’s especially true for young people. And there’s a lot to consider when buying your first home, but one thing other than affordability to keep in mind is how many other millennials are in the same situation. If you’re a millennial looking to buy a home, and you want to live next to other young people, you just might have to move to the Midwest.