Yardi: Rents Rise By 1.5% Nationwide In May 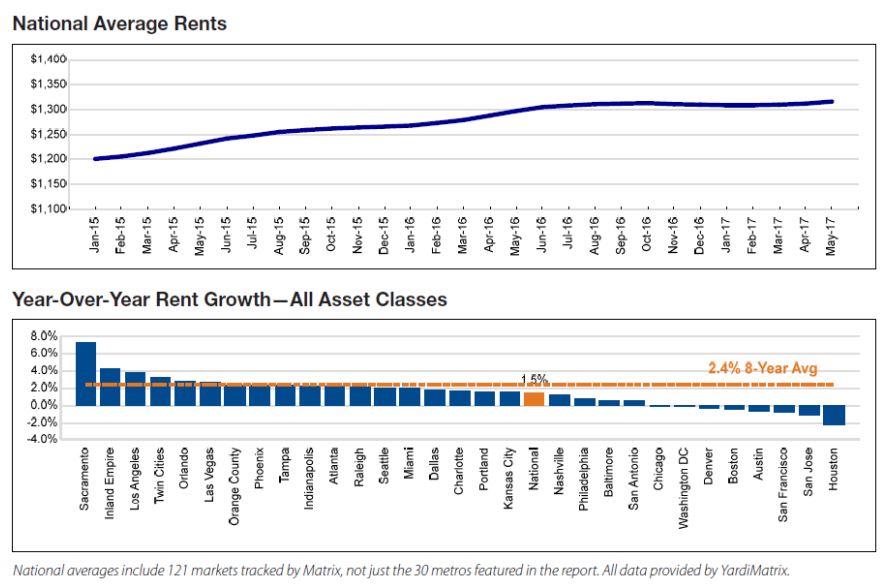 The average U.S. monthly rent rose in May for the third month in a row, up by $4, to $1,316, according to the latest Matrix Monthly survey by Yardi Matrix.

These increases belie the long-standing rent-growth deceleration trend, which has continued unbroken for 13 months. Rents rose by 1.5% year over year (YOY) nationwide in May, down 40 basis points (bps) from April, 90 bps from March, and 380 bps from the 5.3% rent growth recorded one year ago. The last time the YOY increase in rent growth was as low as 1.5% was in April 2011, over six years ago.

Yardi Matrix attributes the ongoing rent-growth deceleration to an increase in apartment supply nationwide, combined with a variety of issues that vary from market to market, including affordability and demand. Yardi expects 360,000 new units to come on line nationwide this year, on top of the 281,000 units that were delivered in 2016.

Many of these new developments are concentrated in the “Lifestyle” class, which caters to renters with sufficient wealth to own but who nonetheless choose to rent. High supply and low demand are driving a flat (0.0%) rate of rent growth in this sector, while low supply and high demand have driven 2.6% rent increases for market-rate “Renter by Necessity” (RBN) units, which cater to renters whose circumstances don’t allow them to own.

On the local level, out of the 121 markets surveyed for Matrix Monthly, Sacramento, Calif., leads the nation, with 7.3% rent growth, followed by California’s Inland Empire, at 4.2%, and Los Angeles, at 3.9%. High-growth markets such as Atlanta (2.2%) and Dallas (1.8%) have experienced some rent-growth deceleration as supply increases.

On the local level, only two metros, Sacramento (0.5%) and San Jose, Calif., (0.4%) experienced rent growth above 0.3%. Yardi Matrix notes that although rent growth is usually strong in the spring, such is not the case this year, as rent gains have been more moderate. Only one metro posted a negative rate of rent growth in this month’s T-3 survey: Houston, where rents fell 0.1%.

On a trailing 12-month (T-12) basis, rents increased by 3.5% nationwide, down 30 bps from April. The RBN sector led rent growth in this category, at 4.5%, while the Lifestyle sector’s rent grew by 2.3%, owing to a new supply of high-end units in many metros.

Sacramento leads the nation on a T-12 basis, with 9.7% growth, followed by the Inland Empire, at 6.6%. Houston remains the only market with negative T-12 growth, at -1.0%, owing to weak economic improvement and an oversupply of high-end units.

Yardi Matrix says it has long foreseen the ongoing slowdown of U.S. rent-growth rates, given the “outsized increases” in rent growth in recent years. It’s unclear, now, how far rent-growth rates will fall, however, or when rates will begin to rise again, the research firm says. Supply is expected to peak this year, although new construction will remain “relatively robust” in the coming years.

Ongoing supply growth will continue to play a significant role in nationwide rent trends in the future, Yardi adds, especially in rapidly expanding markets in the South and West. New completions will add more than 3.0% to total apartment stock in Charlotte, N.C.; Nashville, Tenn.; Houston; Miami; and Denver, among other metros, a trend that has contributed to a drop in occupancy over the past year. In Nashville and Houston, occupancy rates fell by 1.7% and 1.2% YOY, respectively, in April.